When your local farmers market has filet mignon kabob meat, you get it.

Because life is too short for ordinary kabobs. 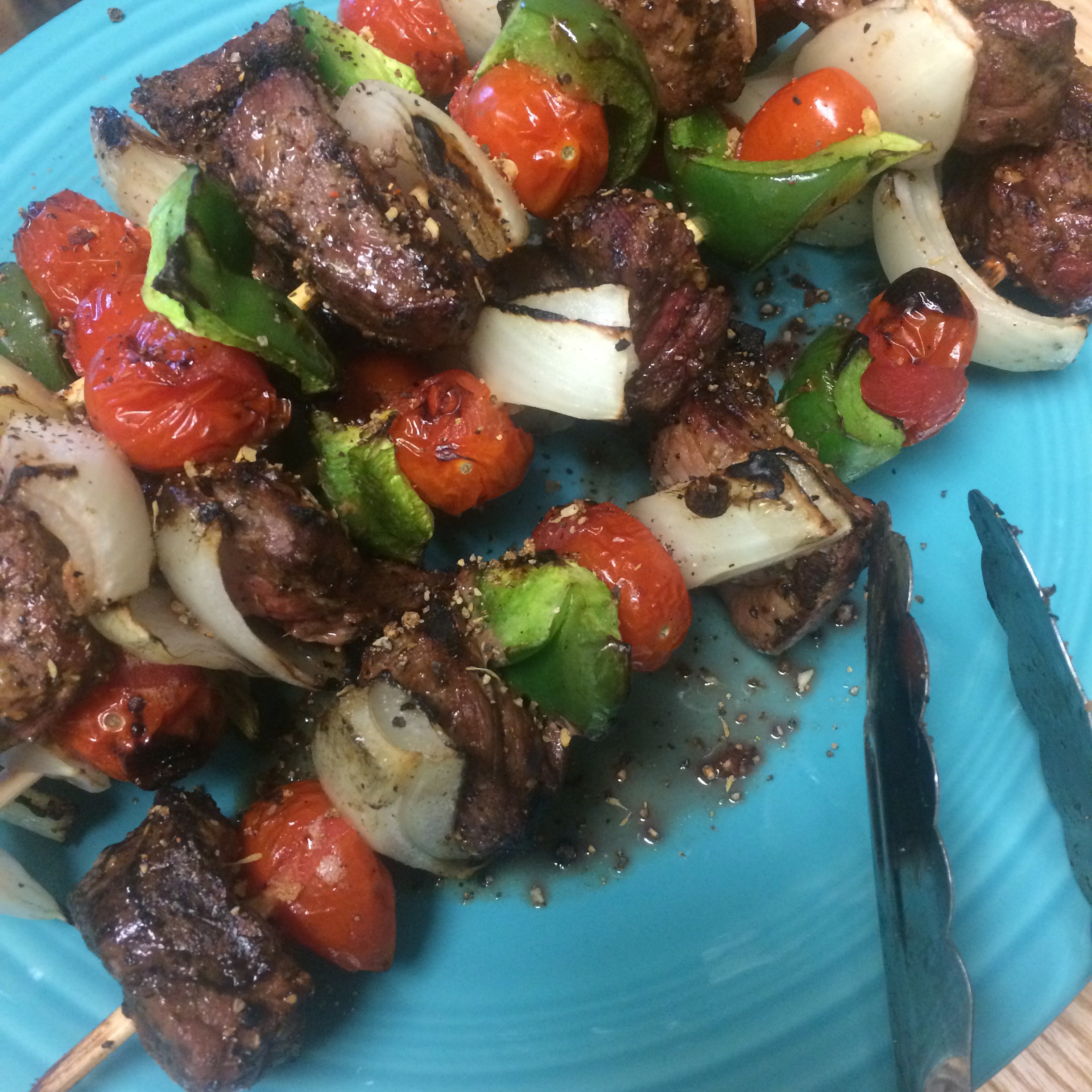 This is so easy.

Just be sure to not stab yourself with the bamboo skewers like I did. Twice.

Heat the grill to 350 degrees. Soak the bamboo skewers in water for at least 10 minutes.

Prep the veggies and meat. Coat the steak with a little avocado oil and steak seasoning.

Put each ingredient on the skewer until all are gone.

Grill for about 10 minutes. The steak pieces are small, and you don’t want to overcook them. Turn the skewers a couple times to get good grill marks.

I plated mine with a side of cauliflower rice.

What are your favorite things to kabob?

This soup is a serious nod to Nom Nom Paleo’s Chinese Chicken and Bok Choy Soup in the Whole30 cookbook.

Sometimes I stand in my kitchen and look aimlessly around the room and hope I generate a delicious idea. And sometimes I need a nudge in some direction.

This nudge came from her Asian inspired soup.

It’s cooling down here. And it happened to be a little rainy the evening I made it. But all the stars aligned to create this goodness.

So thank you Nom Nom Paleo for the inspiration. 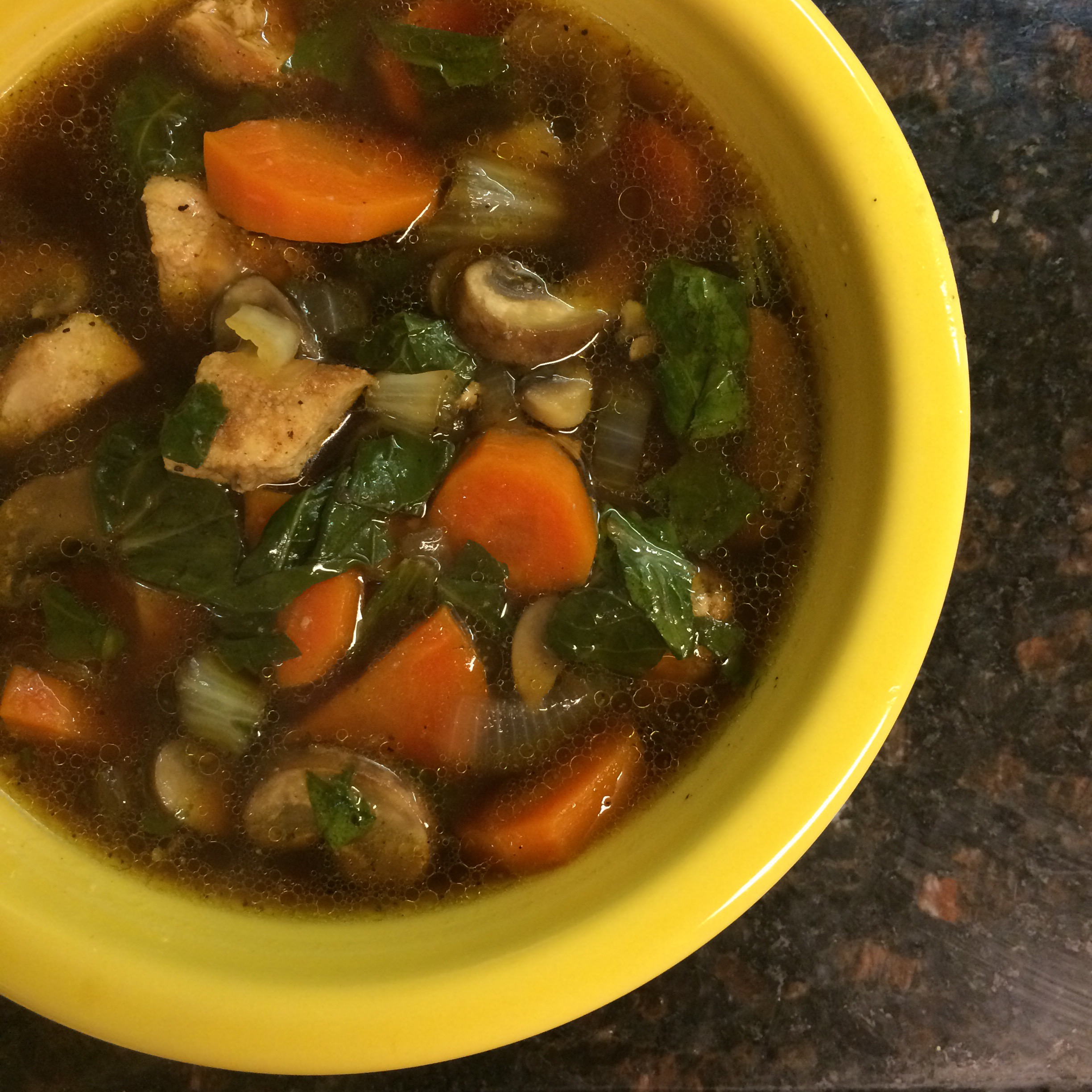 Heat a skillet in the stove to medium heat to cook the chicken. Season the chicken liberally with ginger and garlic powder. Sauté until chicken is cooked completely. Set aside.

Heat a large pot on medium high heat. Add coconut oil with the carrot and onion. Season with salt and pepper. Let cook until onions start turning translucent, about 7 minutes.

Add the mushrooms and season with a little more salt and pepper. Cook about 3 minutes. Pour in chicken broth (I used broth made from my big fancy dinner chicken)and add bok choy, coconut aminos and fish sauce. Bring to a boil. Reduce heat and simmer 20 minutes.

Right before serving, dice up the chicken and add to the pot. Cook 5 more minutes to combine all the flavors.

This soup is definitely a favorite of ours. And I’ll have to make it again and again. I hope you enjoy it as much as we did.

I am all about easy of preparation. So one pot meals are a lovely thing in our house.

And this chicken is no exception. It packs major flavor thanks to the roasted garlic sauce from Thrive Market and the bone-in, skin-on chicken hindquarters from my favorite farmers market.

What I love about this dish is how easy it is. It’s the easiest, fancy-looking thing I made during our recent Whole30. Brad was so impressed by it, and it literally had 3-4 ingredients. 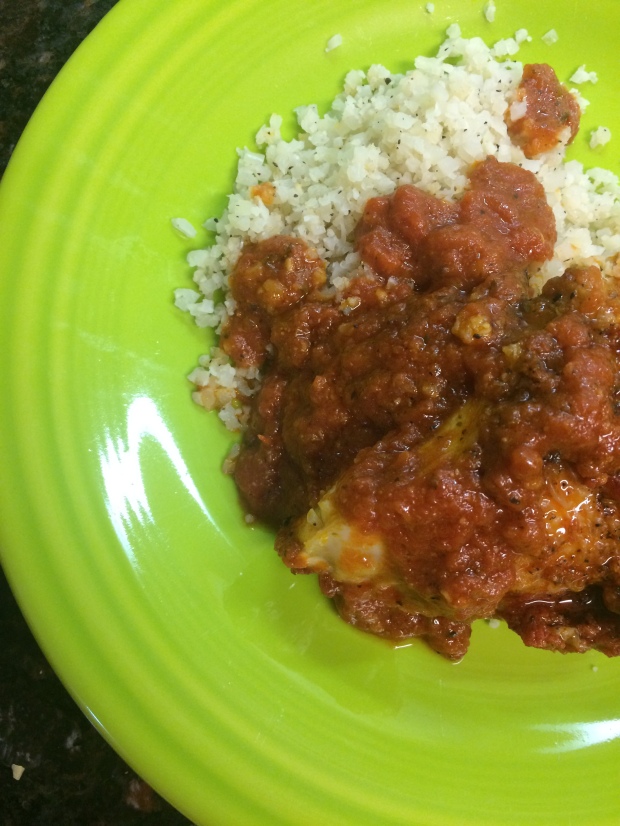 In an oven safe pot with a lid, heat up the coconut oil to medium high heat. Season the chicken with the combo of seasonings listed above.

Please chicken pieces skin side down so it gets golden brown and full of flavor. Don’t move the chicken for at least five minutes. Turn the chicken and sear the other side for 2-3 minutes.

Add tomato sauce to the hot pan. Watch out for splatters. Make sure the chicken is covered in the sauce. Add a pinch of Italian seasoning over the top.

While the chicken cooks, throw your bag of frozen cauliflower rice into a skillet on the stove. Cook on medium heat until it is defrosted, about 5-7 minutes, and all the water has cooked out. Season with salt, pepper and garlic powder. Keep warm until chicken is fully cooked.

Serve chicken with sauce over the bed of cauliflower rice, and enjoy.

The one thing about Whole30 that gets me down is the you-can-only-have-eggs-for-breakfast thing. Sometimes, a girl just wants a stack of pancakes.

So with September Whole30 coming to a close, we thought it would be a good idea to try out some paleo pancakes.

Originally, I had planned to make them from scratch. But wondering the aisle of Whole Foods, I found this little beauty.

You mix in eggs, milk (I used the Original flavored Nutpods) and oil (I used coconut oil).

And you have delicious paleo pancakes.

I topped my pancakes with Thrive Market Crunchy Almond Butter and a little dab of Cinnamon Pecan Creamed Honey from Lake in the Willows Apiary from my favorite farmers market.

The only non-compliant things on this gorgeous plate is the creamed honey topping and the coconut sugar in the pancake mix. Coconut sugar has a lower glycemic index than traditional sugar, supports good gut bacteria and has less fructose than other forms of sugar. The honey just made it decadent. 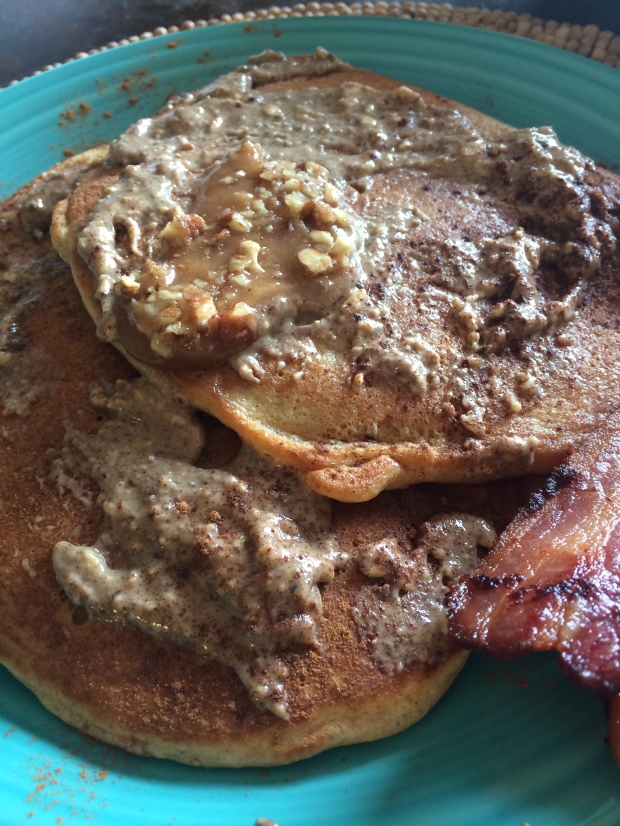 But here’s the thing. We both had full plates, but we didn’t eat everything. We ate until we were full. And then we acknowledged that we were indeed full so we stopped eating. Food Freedom Rule 1: Don’t eat it just because you think you have to.

I’m excited to share our Food Freedom journey with you. It’s always a learning process, but this time it feels different to me. I plan on finding paleo alternatives whenever possible and go back to the Whole30 rules when I feel like I’m losing control.

Not only is October my favorite month, but we successfully completed the September Whole30 reset. And we absolutely feel fantastic.

As of this morning, I’ve been re-reading the major points of Melissa Hartwig’s Food Freedom Forever to get a handle on how to do life after the Whole30.

For me, after Whole30 is over is the hardest part. I’m always nervous about reintroducing foods I know will have a negative affect on me, and I don’t want to lose all of the wonderful good feelings I’ve cultivated over the last 30 days.

But we have a lot of be thankful after this season of Whole30.

Here are some of our NSV (Non-Scale Victories):

And I’m sure there are others I’ve left out.

Since this was our third time to complete the Whole30, I did notice the hangover phase lasted considerably less time than round one and round two. It took me 12 days to feel better during round one. It took eight days in round two.

But this time, it only took four (excruciatingly hungover) days to feel awesome. That to me was the biggest win of all. The mental clarity part of Whole30 is what I crave. The sustainable energy is also a big one.

It feels good to finish something so rewarding.

Check back tomorrow to see how we celebrated our completed Whole30.

Get the latest adventures to wellness here.